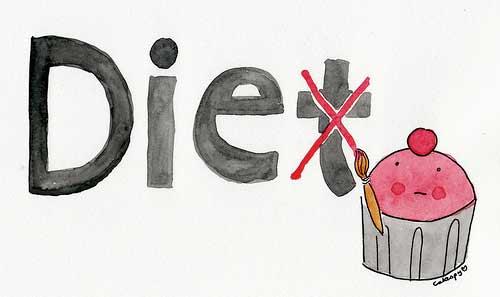 In today’s society, it seems like everywhere you look there’s another fad diet. Some seem downright ridiculous, while others seem like they may be more legit. At some point, most of us have been on a diet before.

In fact, some 45 million Americans go on a diet each year, spending a staggering $33 billion on weight loss products. 2 out of 5 Americans right now are currently dieting, and diet pills are being taken around the world. In Brazil, Russia and Mexico, diet pill sales have increased with 20-30% of people reportedly taking them.

In China, 37% of people report having taken weight loss pills. These can be extremely dangerous and even deadly, especially because the manufacturers are not regulated.

So next time you think about trying a new weigh loss fad, buying diet pills or restricting your food intake, take a look at these 6 things I wish I had known about dieting before I ever went on a diet:

Numerous peer-reviewed publications have shown that food restriction not only causes increased amounts of stress hormones, but is actually directly related to weight gain! Sure, the participants in these studies may have lost pounds initially, but in the long-run they consistently gained up to 20% more than they had lost.

Sure, we’ve all heard the infomercial, “The last diet you’ll ever need.” But this is just not true. More studies have shown that people who are currently dieting are 75% more likely to diet again in the next 12 months. This of course, is evidence that diets just don’t work.

Wait, isn’t this the same as #1? No, the more frequently dieters restricted their caloric intake, the more weight was gained in the long run, according to the American Psychological Association. There is a direct correlation between dieting frequency and weight gain percentage.

They were served the same meals with the same exercise schedule, but those who were told they were dieting were 92% less likely to finish the program. The nondieters who finished the program experienced reduction in blood pressure and cholesterol levels, while the dieting group experienced no change, and some experienced worsened health reports.

In the study referred to in our recovery program, The Ancel Keys Semi Starvation Study revealed the extreme effects of caloric reduction in 36 men. Their daily caloric amount was 1,600, which is well above many weight-loss plans.

By the end of the study, the men’s resting metabolic rates declined by 40%, their heart volume shrank about 20%, their pulses slowed and their body temperatures dropped. 1 in 5 reported unstable mental conditions, one man was rummaging through garbage and hoarding food. In addition, coffee, tea and gum chewing had increased so dramatically they had to be regulated. These men were all healthy individuals before restricting their food intake, and after the study reported extreme psychological and physical adverse effects.

In a peer-reviewed study by four physicians, 74% of patients with bulimia attributed the development of their eating disorder to the inability to maintain a low-carbohydrate diet, leading to carbohydrate craving and subsequent cycles of binging and purging. The fact is diets lead to eating disorders.

Restrained eating and dieting practices, independent of body weight, was found to be a better predictor of future eating problems than obesity. These findings are similar to another study in which male military volunteers were placed on a very-low-calorie diet. All of them had symptoms of eating disorders, including preoccupation with food, food hoarding, and emotional instability.

My experience with dieting:

I was once a dieter who restricted food, exercised obsessively and eventually suffered from bulimia nervosa. It took me 3 years of dieting to get there, then 6 years of bulimia to seek help. After nearly 10 years of disordered eating, I had lost my fullness and hunger signals. I obsessed with every bite, and constantly compared myself to others. I began structured eating as part of the Bulimia Help Method, and within 6 months, my recovery was underway. After about a year I considered myself fully recovered, but it was a long and difficult journey.

With the high prevalence of dieting especially in women, who are 4 times more likely to be on a diet, and with 25% of college age women reportedly binging and purging as a means to maintain weight, I wish I had known this before beginning my first diet.

Something that starts as an innocent fitness challenge or trying to lose weight before an event can end with severe, life-changing consequences.

What begins as a diet can result in long-term health problems such as dental decay, electrolyte imbalance, malnutrition, hair loss, heart problems and decreased gland function. In addition, dieters can suffer depression, anxiety, moments of extreme happiness spiraling down to extreme sadness, and an overall obsession with weight and calorie restriction.

There is hope for recovery!

Studies in both animals and humans show that once food restriction has ended, normal eating resumes and adverse health effects tend to disappear or become minimal.

This is hope for any current dieters or those who restrict food: once restriction is removed, so are the adverse consequences. It takes time to resume normal eating habits, but once they are restored, the physical and psychological effects of restriction and dieting subside.

For those who don't know me, my name is Jen Knaebel. I'm a recovery coach here at Bulimia Help. I've made a full recovery from bulimia and now spend my time coaching others through the process.

You can listen to my story or check out my coaching page if you're seeking support.