We’ve already spent a little time looking at bulimia therapy  and the 5 top bulimia treatments , but do those treatments and recovery methods apply to people who suffer with anorexia too?

What about people who experience both anorexia and bulimia?

Many of our members here at Bulimia Help say they have experienced symptoms of both anorexia and bulimia (Bulimarexia) and for those who exhibit symptoms of both eating disorders it can be important to gain a better understanding of the different methods of treatment used for each.

(Differences between bulimia and anorexia)

There are a lot of  similarities with anorexia and bulimia treatment , but there are also some obvious differences too...

One of the main differences in treatment has to be the emphasis that anorexia treatment puts on weight gain. Obviously with most bulimics maintaining an average or above average weight this is not a primary focus in bulimia recovery.

A new study out this week...

The anorexia and bulimia treatment guidelines below are recommendations from The National Institute of Health and Clinical Excellence (NICE) who set out the best practice guidelines to health professionals in the UK.

As you will see the table shows that the first step treatment suggestions are quiet different for anorexia and bulimia.

There are also differences in the types of psychological interventions used as well as varying medication suggestions for each disorder. 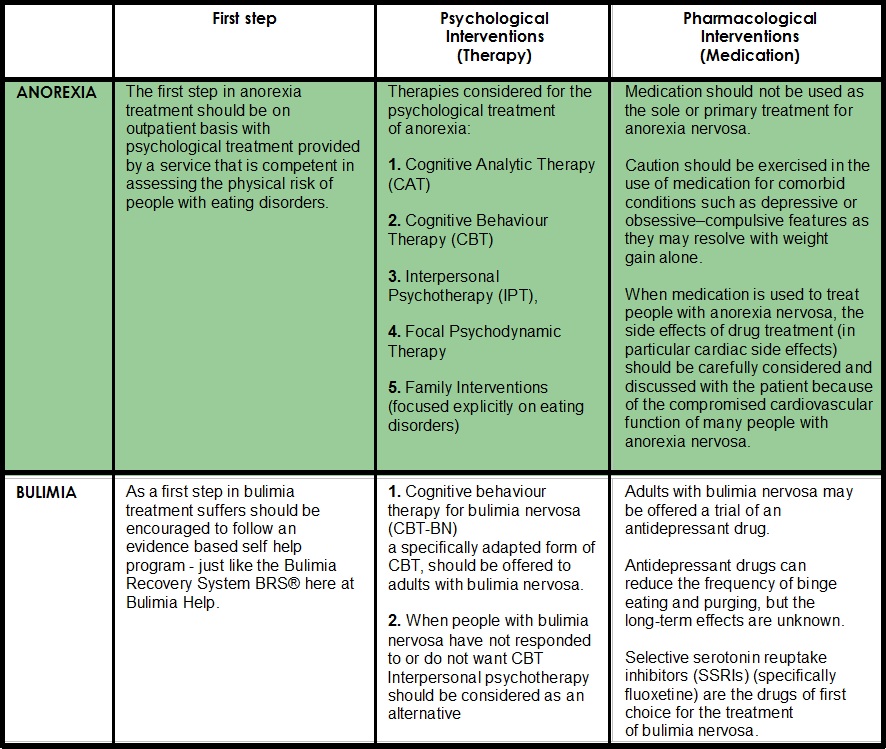 It is important to understand that the anorexia and bulimia treatment methods may vary depending on what part of the world you are in, however in general they tend to follow the pattern shown above.

Although it is quite rare for someone with bulimia to be hospitalised in this way. (Learn more about bulimia rehab)

The great news is that if you have bulimia medical practitioners actually suggest self help methods as your first step towards recovery...

Here at Bulimia Help our Bulimia Recovery System has already helped thousands of people just like you to say goodbye to their bulimia forever!

If you'd like to know more then why not sign up for your free bulimia recovery course now!