It can be very easy for people with bulimia to put on a brave face and hide their suffering from the outside world and while many celebrities with bulimia now openly talk about their experiences in order to raise awareness, many of them at one time or another managed to completely conceal their eating disorders too.

As challenging, draining and overwhelming as it can be to live with bulimia, there are so few physical signs that even famous people with bulimia, who are continually being scrutinised by the public, their fans and the media, can easily conceal their eating disorder.

More than that though, it's really quite unnerving to realise how easy it can be to put on a show and convince the world that you're life is amazing, when inside you feel completely broken and helpless.

Who are some well known bulimic celebrities?

If you take a look at the picture below I'm sure that you'll see a few familiar faces. All of these celebrities have suffered with bulimia or have been rumoured to have been suffering with bulimia at some point in their lives. 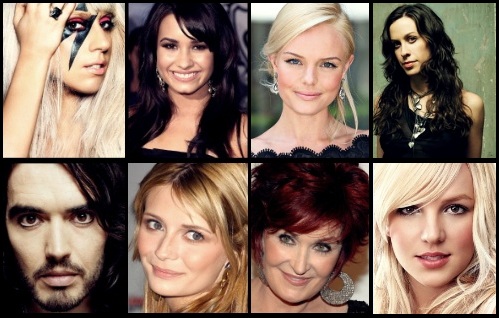 The truth is the list of celebrities opening up about their battles with bulimia and other eating disorders is continually expanding. Here are a few examples of stars with bulimia or who have battled bulimia in the past:

Most recently teenage singer-songwriter, musician, and actress Demi Lovato talked openly about her struggles with bulimia in an attempt to raise awareness of eating disorders and the havoc they inflict on peoples lives.

People often argue that there would not be so many celebrities with bulimia today if we still lived in an era where Marylin Monroe's body type was idolized...

While I like to think there is a lot of truth in that idea, it's important to consider the fact that even someone at a healthy weight like Marylin could still be suffering with bulimia.

You may not really think of someone with a curvy body like Marylin Monroe having bulimia but remember most bulimics tend to be average or above average weight and come in all shapes and sizes.

Other famous people with eating disorders

Especially celebrities with anorexia may find it a little harder to conceal their struggle because there are a lot more outwardly visible signs.

Think about Mary Kate Olsen's eating disorder and how shocked the world was when severely emaciated photographs of her emerged a few years back. Also when Nicole Richie exhibited eating disorder signs it was a lot harder for her to conceal the truth due to her dramatic weight loss.

So what, celebrities have eating disorders - why should we care?

Even now that people have started to talk about their eating disorders, stigma, shame and a ridiculous amount of misconceptions relating to eating disorders and bulimia unfortunately still exist.

But when a celebrity with bulimia, or anyone else in the public eye begins to talk about their struggle it opens a new dialogue and it gives the media another chance of getting the facts right -and let's face it, with their love of sensationalism they need as many chances as they can get, right?

When celebrities with bulimia bravely talk about their struggles it gives us all a chance to start spreading more awareness about the realities of Bulimia. It can also help to really re-inforce the fact that anyone can suffer from bulimia, at any point in their lives.

Jane Fonda was my celeb icon when I was younger... despite the video fitness tapes being decades old I loved the New Workout video and thought Jane was brill! I could not believe that she had struggled with bulimia for so long. I think she was one of the first celebs to open out about it ... very brave I say.

Bulimic celebs in the news...

Does anyone remember the mayhem when John Prescott admitted he was bulimic a couple of years ago? (For those of you who don't know John Prescott he is a former Deputy Prime Minister of the UK).

Just because he was visibly overweight the whole world appeared to be thrown into chaos - yes newsflash people with bulimia can be ANY weight!

Whether we like to admit it or not I think at times we have all looked up to or aspired to be like certain celebrities...

Also whether we like it or not,  celebrities hold a lot of "power" in the world today. If celebrities with bulimia disclosing information about their own personal struggles can help to raise awareness then I think that has to be a good thing.

Whether you love or hate celebrities, imagine how hard it must be for bulimic celebs to come out and share their deepest most personal secret with the world.

I found it hard enough telling my friends about my battle with bulimia, I can't even imagine what it would be like having to tell "the whole world".

Catherine. i just want to add

Catherine. i just want to add a personal comment. you are beautiful - not just physically...

Hi I am in school and I am

Hi I am in school and I am doing a powerpoint on bulimia if you have anyifo that you can share please contact johnsonvalicia@gmail.com