It’s time to boost your knowledge of bulimia and dispel any misconceptions or false beliefs once and for all. This section of Bulimia Help should give you a better understanding of the realities of bulimia.

This is an all-purpose guide, suitable for both sufferers and non-sufferers of Bulimia. To start with we’ll talk about what bulimia is, what we mean when we talk about purging, what causes unavoidable binge urges and why it's impossible for someone with bulimia to "just stop" bingeing. 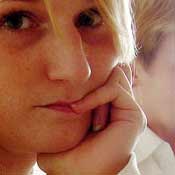 Bulimia Nervosa (generally shortened to ‘Bulimia’) is an eating disorder that causes it’s suffers to experience powerful URGES and COMPULSIONS to binge eat very large quantities of food. After experiencing an episode of binge eating (bingeing) someone with Bulimia usually experiences two things:

These feelings and fears mean that the person is often compelled to then engage in "compensatory behaviours" in an attempt to alleviate or numb difficult emotions and prevent weight gain.

When we talk about “compensatory behaviours” in people with Bulimia we mean PURGING.

Unsure whether you have bulimia?

Many people know that they exhibit bulimic signs, symptoms and behaviours but are still unsure if they actually have bulimia or another type of eating disorder.  If that sounds like you then don't worry we are here to help, check out the diagnostic criteria for bulimia nervosa and our "Bulimia Nervosa Quiz" now.

The term "Purging" refers to any behaviour that someone with bulimia uses in an attempt to rid their body of food. Sometimes people feel that purging also acts as an emotional release which helps them to deal with or numb painful emotions.

There are several methods of purging that someone with Bulimia may use. They include:

So really when we use the word "Purging" we are refering to:

Sometimes people with bulimia will use a combination of purging methods.

When purging takes place to counterbalance bingeing many people with Bulimia make a promise to themselves never to binge and purge again...

Unfortunatly many fail to break the cycle because it is impossible to beat Bulimia using willpower alone.

It is important to understand that Bulimia is a very real, life-threatening and debilitating disorder over which the sufferer has no control.

Bulimia is NOT a choice, a diet, a fad or something that a person will simply "grow out of" in time.

Often without the right information, guidance and support someone with bulimia will continue to feel powerless to break the cycle of bingeing and purging, no matter how much they want to recover.

The great news is that armed with the correct knowledge, support, information, tools and motivation it is 100% possible to achieve full, life-long recovery from Bulimia.

There are three things that cause people with bulimia to experience unavoidable binge urges. They are:

1. Physical Deprivation - brought about by restricting food intake or because the body can’t absorb enough nutrients.

When someone is lacking certain nutrients they will always feel the urge to binge as a result. This is the body’s attempt to restore what it needs in order build and maintain a healthy system. Someone with bulimia may eat a lot but their body may still be starving nutritionally.

2. Mental Deprivation- brought about by avoiding specific foods because they are “bad”, “unhealthy” or “triggering”.

Someone’s diet may be 100% healthy but sometimes it's okay to eat less healthy foods too.  When certain foods are restricted due to unhealthy "food rules" they tend to be all the person can think of eating. This causes mental deprivation and an increase in binge urges, especially for those banned foods.

3. Emotional distress – brought about by feelings of intense and overwhelming negative emotions that the person feels unable to cope with.

During emotionally challenging times the body starts cranking out adrenaline and cortisol. Cortisol increases a persons appetite for fatty and sugary foods. If someone is depressed, their body will also crave more food because it can use it as a way to temporarily increase the endorphins in the brain.

Of course in time someone with bulimia can make gradual changes that will allow them to avoid all three types of binge urges, but this takes time, which leads us on to a very common question people tend to have about bulimia:

Why can't someone with bulimia "just stop" if they really want to recover?

It can be very frustrating for people with bulimia when others presume that if they really wanted to recover then they would “just stop”. In reality it’s no where near that simple.

Recovery is a GRADUAL PROCESS because there are just no quick fixes.

To expect anyone to “just stop” is highly unrealistic because It takes time for people to learn how to re-balance their bodies and accept negative thoughts and emotions without turning back to bulimic behaviours.

It can take at least 6 months for someone with bulimia to overcome the distressed hunger state that bingeing and purging has put their body in – that means six months work in recovery to just move past those physical binge urges.

The important thing to remember here is that people can and do recover from bulimia, it just takes a little time...

I remember a time when I thought recovery would be impossible, that people never really recovered from bulimia and that at best I would have to fight for the rest of my life to stay in recovery.

Well I've been recovered for almost 2 years now and I don't have to work at recovery at all anymore because being "normal" is a very natural thing these days. I promise you all three of those presumptions were completely false.

At Bulimia Help we honestly believe that life-long recovery from Bulimia is possible for everyone!