Bulimia and Pregnancy: What You Need to Know

When you suffer with bulimia you can often find yourself overcome with anxiety about the possible health implications and long term damage that it can cause - this can be especially worrying if your dealing with bulimia and pregnancy. 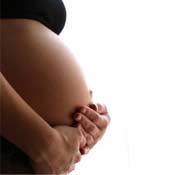 But what if you find yourself dealing with an unplanned pregnancy before you have managed to recover?

None of us like to think about the health implications that bulimia can have and I know from experience that reading a list of bulimia side effects is enough to make you want to run away from reality even more, but as daunting as the information can be it’s important that you understand the different ways that having bulimia could effect your pregnancy.

If you become pregnant and still unable to recover from bulimia evidence suggests that you could face a greater chance of miscarriage, delivering your baby prematurely, delivering a still born baby or delivering a baby at a lower birth weight.

The effects of purging on fetal development are unfortunately pretty much still unknown...

What is known is that poor nutrition in pregnancy can lead to problems with fetal development. That means both the mental and physical development of your unborn child.

If you are depriving yourself or restricting food in any way then your unborn baby will be deprived as well.

Current research also suggests that women with bulimia may also be at a greater risk of developing postpartum depression.

Unfortunately, despite having an overwhelming desire to protect your baby you may find that without adequate support and recovery guidance you are still unable to break free from the cycle of bingeing and purging.

If you’re interested in finding out more about our approach to recovery here at Bulimia Help then sign up to your free “7 Days to Kickstart Recovery eCourse” now!

How pregnancy effects eating disorders and their symptoms really does vary from person to person:

Sometimes pregnancy can help with recovery…

Oddly, since I have been pregnant, I have no urges at all to binge (Bulimia Help Member, 2011)

Many people find that pregnancy can cause a dramatic decrease in, or even a complete loss of all bulimic urges. There are many theories floating around as to why this happens.

Some people believe that they overcame their bulimia during pregnancy due to the intense need to protect their un-born child:

When I was pregnant it was all about my growing baby, this meant ed had to bog off & that’s what happened (Bulimia Help Member, 2011)

On the other hand:

My cravings were so strong and I was so afraid of weight gain. I'm ashamed to admit it but I just couldn't stop bingeing and purging during my pregnancy. (Bulimia Help Member, 2009)

What should you do if you become pregnant and are still bulimic?

If you do discover you are pregnant and your bulimia continues it is vitally important to tell your doctor because pregnancy relies so heavily on your body and its ability to function well.

Your doctor may well be able to provide additional support and advice in order to ensure your unborn child remains as safe as possible.

But telling someone you have bulimia is not easy…

Telling someone you have bulimia can be very challenging but the idea of having to say to a loved one, nurse or doctor - “I'm pregnant and have an eating disorder” can be emotionally overwhelming.

In many ways pregnant people with bulimia feel even more shame at being unable to control their eating disorder. Take a look at what one of our members said about being bulimic and pregnant:

None of them would dream that I'd be selfish enough to carry on doing it now, so I cant even talk to anyone about it (Bulimia Help Member, 2011).

The important thing to remember is that it’s okay to ask for help. As hard as it may be to push past the fear and shame that you may have from being pregnant with bulimia you must remember that having bulimia is NOT your fault.

You did not chose to have bulimia but you CAN choose to do everything in your power to protect your unborn child...

If that means telling your care team so that they can offer more support then it really does need to be a top priority.

Realize that there is a very good chance that your doctor, nurse or midwife has encountered pregnant people with bulimia before and they should be able to give you some much needed additional guidance, advice and support.

My midwife was the only person I ever told about my bulimia, she was really understanding and helped me to devise a meal plan that I could realistically stick to during my pregnancy. I haven't binged or purged at all so far! (Bulimia Help Member, 2010)

Thinking about becoming pregnant in the future?

Many people make recovery one of their goals because they one day hope to start their own family. Planning for the future can be a great way of creating a healthier life for yourself, but of course with that planning comes a whole host of new worries -

“Does bulimia make it harder to conceive?”

The honest answer is that having bulimia makes it harder for some people to concieve while it doesn’t effect others at all.

I know it can be frustrating to not have a definitive answer, but we’re all so unique that there is no way of saying for sure.

There can be risks of infertility if you have bulimia…

If you are female and have bulimia you can suffer with fertility problems because bulimia sometimes causes you to experience an irregular or erratic menstrual cycle which makes it difficult to conceive.

Bulimia and damage to the reproductive system…

If you are a male with bulimia then it is also possible that you could become temporarily infertile as a result of bulimia although research into this are is still really limited so it’s hard to say how much of an impact bulimia actually has on male fertility. Learn more about how to recovery from bulimia

Bulimia side effects and how it affects your body and mind